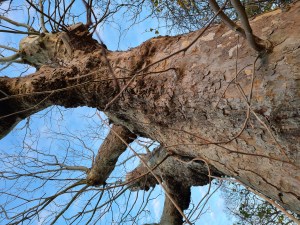 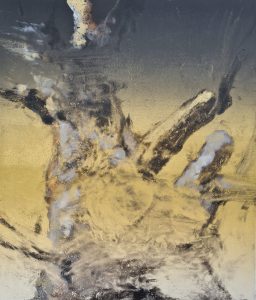 the original ‘ghost’ print of Stump #194, prior to its final print to becoming Stump #195 (Ghost)

My neighborhood Trees from the Tree Portraits Series expanded to include dead/dying trees in nearby Wanstead Park, & from Dartmouth (where I now Reside), from July onwards; and Monoprints from the latter months of 2020 were further informed by the following literature; ‘The Hidden Life of Trees’ by Peter Wohlleben, ‘The Uninhabitable Earth’ by David Wallace-Wells, ‘Gaia’ by James Lovelock, & Merlin Sheldrakes’s amazing ‘Entangled Life’, which expand on the relationship of Trees with Fungi (and other fascinating endosymbiotic relationships, such as Lichens.).

The latter in particular led me to start using a 2nd printed image from the original Monoprint (the ghost print) & then printing over these using handcut stencils made of old offcuts of TruGrain (around the original outline of the Stump) with translucent White/Creams with Gloss extender. the ink on this print would then behave/look like the fungal mycelia reaching throughout any given Tree….