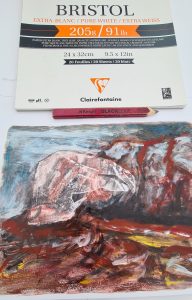 ‘Gymnogyps’, below its parent Cartridge pad

‘Gymnogyps’ came about after reading ‘Condor’ by John Nielsen, a superb story about the near extinction of the Californian Condor [Gymnogyps Californianus]. you may recall that this species was almost wiped out by the end of the 1970’s, consequently all of the remaining Wild birds were caught and made part of the most ambitious captive breeding programme of a Generation. This book relates the enormous drama that surrounded all of this event, it’s hugely successful results, but also the grim backstory that brought this magnificent bird to the Brink.

This print echoes both the head of the Condor, & the glove puppets that were created to help raise the captive bred Chicks, & also recalls the reverence with which Native Indians have for this species.