Cork III, Photoetching, 1998 Photos taken in the countryside around Skibbereen during my time at the Arts Centre

Combining a growing confidence in Photoetching & a full embracing of Subject matter,
my Graduate Work reflected deeply on the passing of my Father using site specific Photography, borrowed texts & musical score fixed within Triptych layout to purvey a filmic passage of time.

Once I returned to printmaking several years later I explored further musings on the passage of time
& started to reflect on wider human behaviour, our place in the Environment & more personal elements
with regard to my confidence or otherwise in the World…

I started to really trust myself as a Artist following a Residency in Cork in 1998, which allowed me to devote the necessary time to my continued learning & Output. From here the both the Scale and content began to evolve…

Evolution, Photoetching 1999, £300. photos taken in the Three Sisters area of Glencoe during a lads camping holiday

(Sold out) part of Degree suite, but not shown in final Show 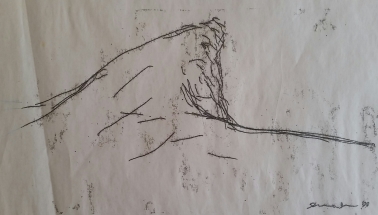 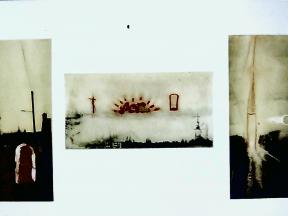 Allegory I, Photetching, 1998. £250 created from Found super 8 cine stills that belonged to my Dad

main piece from my Degree Show (Sold Out), the original site-specific photographs taken at Home & on Headley Heath