Stump #145 (Crucifixion Plane II) is from an ongoing series of over 200 Monoprints called the Tree Portraits.
this is part of a smaller sequence of Prints within the Series, where I was learning more about seasonal Heat Stress experienced by Street Trees, & others in general.
the crucifixion metaphor, lighting & colour scheme was an echo of ‘The Rite of Spring’ dinosaur extinction scene from the Disney classic ‘Fantasia’.

London’s Pollarded Street Trees (predominantly Lime & Plane, chosen for their resilience to pollution) quickly became something of a multi-valent representation to me of so many things we do/don’t know about Ecology, & Nature’s Real place in our world.​
​
Their appearance defines an ongoing relationship with Man; indeed, many of them have a cartoon human appearance, with distinct heads, arms & bodies; and because of this back & forth, dynamic process of growth & removal over time the Trees seem to dance in a particular direction, as they struggle (vainly) to grow bigger, both outwards & upwards. They seem to me like huge Bonsai.​
​ 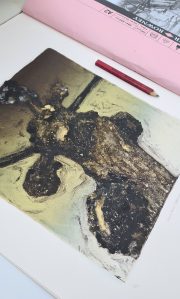 There are wonderful areas where growth & weight make the Trees bulge & the bark appears more like a liquid, flowing down around the younger pollarded areas with gravity. This can only really be appreciated from the base, looking straight up.​
​
This gets more interesting to me regarding the process of printing them, & the subject, the longer I do them.​
​
There’s a certain rhythm to doing these in such volume – I’ve tried to represent every tree in my surrounding Streets – the repetition of shapes, forms, movement & texture reminds me of a cruder form of Chinese Sung painting, where Artists would spend years representing birds, flowers & landscapes thousands of times, until the process takes over & that Subject metamorphoses, & almost becomes something else.​