Ojai #4 is part of another element of my current Tree Portraits series which were created for a Commission from the USA (11 Prints were ultimately purchased), where I documented the arid region of Ojai in California. While many native species are hardy & naturally resilient, the current extremes of Climate experienced in the region are enabling a number of accidentally introduced diseases to take advantage of them, including the Sudden Oak Death.
the majority of Prints in this series record a number of Live Canyon Oaks, some of which have been affected by the water mould pathogen (Phytophthora Ramorum) which leads to this dieback. 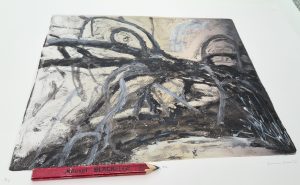