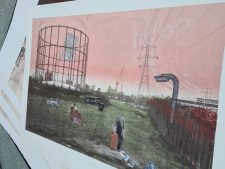 ‘E12 No Go Zone’ in the Artist’s Studio, viewed from the right side

This Print was inspired by the outrageous statement in 2016 by Donald Trump stating that numerous parts of the UK had become No Go Zones because of Muslims. my response was to place Trump in the now derelict Leigh Road Sports Ground (next to the North Circular motorway in East London/E12) at the moment of being beheaded (by Me, I’m wearing a Niqab btw…) with a large spoon.